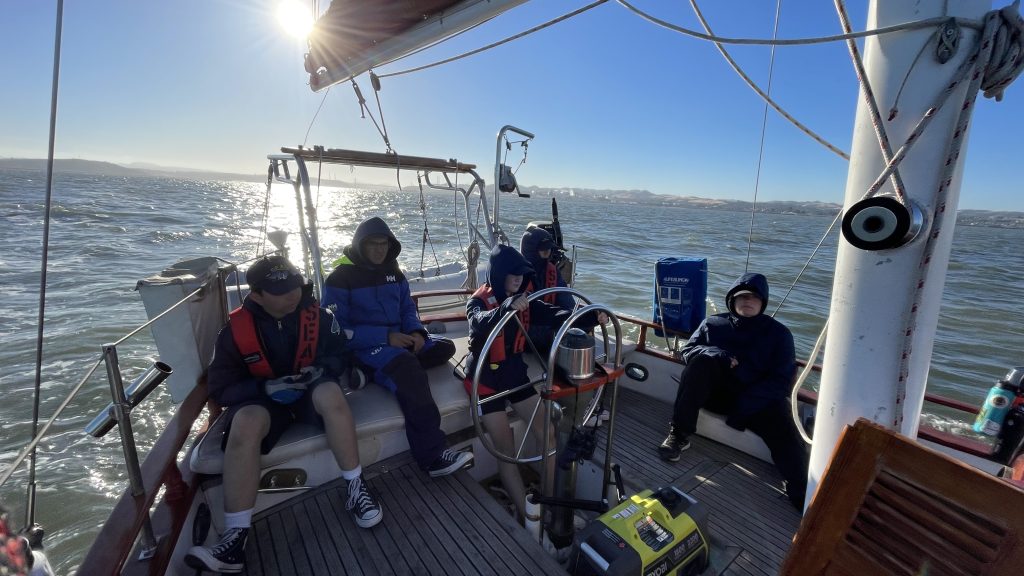 SEAL is an amazing learning experience and scouts from SCOUTS BSA, VENTURING, and SEA SCOUTS are all able to attend! Should you want to attend SEAL training you can find more information HERE.

In addition, HERE is more information on how to get your youth involved in a local sea scout ship. Check out the below for a wonderful report on the latest Bay Area SEAL training.

On June 15, 2022, seven scouts and four adult leaders started the 2022 San Francisco Bay SEAL course. SEAL or Sea Scout Experience Advanced Leadership is the highest youth leadership training course offered for all of Scouting and for the past three years, minus the pandemic years, it has been offered aboard the Sailing Vessel Windward Spirit and led by Skipper Ken Shupe of the SSS Sea Fox out of  Alameda, Vice-Commodore Doug Love of the SSS Chaser out of Napa, California, Skipper Lynn Kramer of the 1886 out of San Diego, California, and Mate Adrian Djelardin of the Spartan out of  Antelope Valley, California.

The Scouts were from all parts of the country. Two were from Southern California, three were from the Bay Area, one was from Maryland and one from North Carolina. None had been on the Windward Spirit before and most had not sailed or cruised on the San Francisco Bay and Delta. After arrivals and meeting one another, the first day was taken up with vessel familiarization, stowing of food and gear and dinner. The second day was a “learning day” at the Aeolian Yacht Club, where the candidates  worked on navigation, were taught about learning styles and lesson planning, team building and then put the team-building into practice by working together to practice “hoisting the scuttlebutt”*.

On day three, the Windward Spirit got underway for our first stop, Angel Island. The first Boatswain and Navigator worked very hard to keep control of the boat and crew despite not having sailed the vessel, or worked together past the first day. After picking up a mooring in Ayala Cove, the crew learned about planning and preparation and then took a hike on the island. They then learned about improving communications between each other and other people. The night was very cold and windy and the next morning, the crew began to wonder what they had gotten into. The next morning was an early morning with a long sail to Pittsburg, more drills, and the crew began to come together as a team. The crew had some well-deserved liberty ashore, took advantage of the hot showers that were available and then began learning about goal setting and conflict management.

Day five was a sail to Rio Vista, with a planned live man overboard and other emergency drills thrown in. The candidates learned about problem solving, had a brief liberty ashore and began their teaching lessons. They also had the first of the conferences on their progress. From Rio Vista, the Windward Spirit made its way to Walnut Grove. This was the first time some of the candidates ever requested a  drawbridge opening. In Walnut Grove, scouts and leaders got ice cream, had a swim call and continued giving their practice lessons. They also learned about leadership theory and what makes a good leader.

Day seven was a cruise down Georgiana Slough to Willow Berm Marina and a re-provision day. The candidates met in the clubhouse to learn about their own strengths and how to work with the strengths of others. It was also a day for partial laundry and to work on their staff study, a group project about  planning a summer cruise event. After a good night’s rest, the next morning the Windward Spirit headed back to Pittsburg. This was to finalize their teaching assignments and the staff study. Day  nine was a motor sailing day to Benicia. There the crew presented the group project and were treated  to homemade lemon bars by Mrs. Love. They also had any laundry they needed done and had more ice cream, visited the farmer’s market and learned how to implement what they had learned once they returned home.

Day ten was a trip to South Beach Marina in San Francisco, graduation night dinner at Delancey Street Restaurant, the graduation ceremony at Aquatic Park, in which all seven candidates received their pins and more ice cream at Ghirardelli Ice Cream. They were then given some time to explore Pier 39 and  Fisherman’s Wharf.

Day eleven was a short cruise back home to Alameda in which Territorial Commodore Jordyn Alexis and some crew of the SSS Viking joined us. Then the newly pinned graduates made their way home.

The SEAL training program is designed to teach leadership skills while underway. SEAL is designed to “jump start” the junior leaders of new units and to fine tune leaders of experienced units. It is a demanding and remarkably rewarding hands-on leadership experience. New and experienced Scouts will succeed at SEAL so long as they are willing to learn and work hard at preparation.

* Scuttlebutt – The Water Cooler Talk of 19th Century Seafarers
When office workers catch up on the latest scuttlebutt around the water cooler, they are continuing a long-standing tradition that probably also occurred on the sailing ships of yore. Back in the early 1800s, the cask containing a ship’s daily supply of fresh water was called a scuttlebutt (from the verb scuttle meaning “to cut a hole through” and the noun butt, “cask”); that name was later applied to a drinking fountain on a ship or at a naval installation. In time, the term for the water source was also applied to the gossip and rumors generated around it, and the latest chatter has been called “scuttlebutt” ever since.
Merriam Webster Dictionary definition